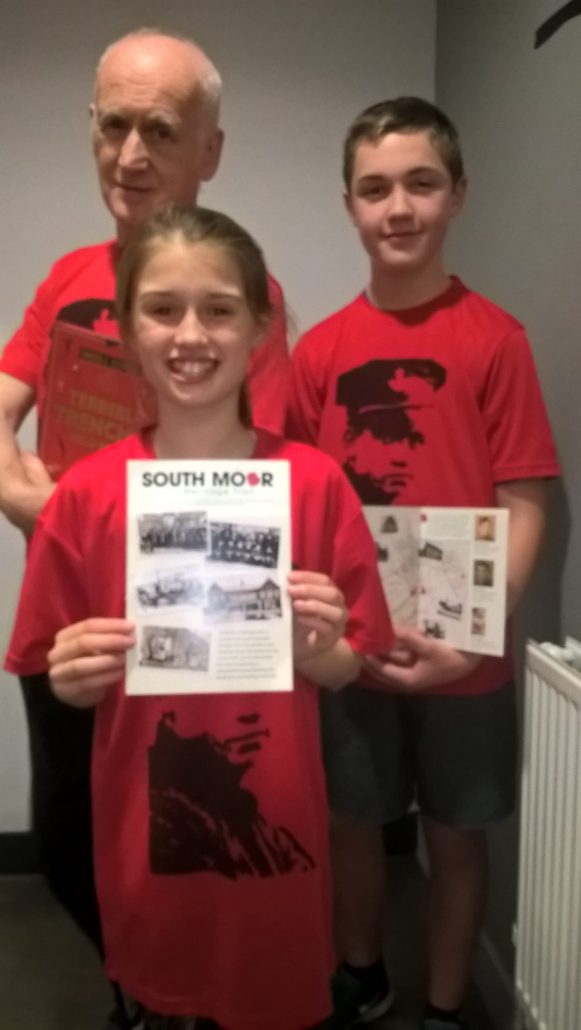 Two hundred and thirty three miners are named at the gates of South Moor’s First World War Memorial Park. Behind each name is a tragic story of loss and bereavement but perhaps none more so than that of Lance Corporal Peter Goggins who volunteered for Kitchener’s Army in 1915. Goggins, like many Durham miners of short stature was recruited to a ‘Bantam’ Battalion of the DLI as a specialist tunneller. Keen to leave the mines of South Moor he saw action at Ypres and the Somme winning promotion to Lance Corporal and marrying his South Moor sweetheart in 1916.
Goggins fortunes would change on the 26th of November 1916. Isolated in a forward location as a German detachment advanced to over-run his trench his Sergeant ordered a withdrawal, jamming his rifle across the trench to slow the attack. Goggins left his position rapidly falling back. On re-joining his company he was immediately questioned, accused of desertion and jailed.  Court martialled on Christmas Eve he was sentenced to be shot by firing squad, in spite of supporting evidence from his Sergeant. At dawn on the 16th January 1917 Private Peter Goggins was executed alongside 2 other DLI comrades.
Now residents and visitors can walk round a South Moor and Quaking Houses First World War heritage trail that marks the homes and collieries of the fallen miners such as Goggins. The trail funded by the Heritage Lottery Fund, and Stanley Town Council links to a dedicated website www.southmoorheritage.org.uk hosting the individual stories of all two hundred and thirty three fallen miners and documents life in South Moor at the time of the First World War.
In remembrance of Peter Goggins and his miner comrades Horrible Histories Author Terry Deary and Derwentside Athletic Club have organised The ‘Goggins Comrades Run’ starting at 9am on the 11th November at the Haven on Pine Street. Fun runners from across Durham will join Terry on the 5 mile route around the rural heritage trail finishing in The South Moor First World War Memorial Park. ‘The story of South Moor and Private Goggins is the story of every mining village and every mining family in Durham. None escaped tragedy and loss in the First World War. Sunday’s armistice  centenary is testament to the wars lasting impact and I am delighted to support this tribute to Goggins and his surviving family’
Terry Deary’s latest book ‘Terrible Trenches’ uncovers the hidden horrors of the First World War. Relatives of miners named on the South Moor memorial, including Peter Goggins, are invited to attend the South Moor Park remembrance service at 10.45am  on the11th November. Organisers are also so keen to add the stories, photographs and  letters of South Moor soldiers to the website contact Adrian Cantle-Jones project manager by emailAdrian.cantle-jones@durham.gov.uk or telephone 03000 265259.
Picture: Horrible Histories author Terry Deary pictured with junior members of Derwentside Athletics Club
Remembrance Events in Stanley November 2018