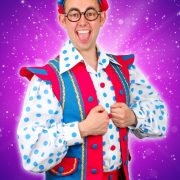 This December, pantomime returns to Stanley Civic Hall with Beauty and the Beast. As theatres safely reopen their doors to audiences, it’s time to look forward to Christmas and the star of this year’s laughter-filled offering.

Cal Halbert, frequently accompanied by BBC Newcastle’s Alfie Joey, is best known as one half of The Mimic Men. As a leading light on the Comedy scene, an established star of Pantomime, and hit appearances at the Utilita Arena to the London Palladium; Stanley’s audiences are in for a treat.

“It’s my privilege to be writer, director and producer of Beauty and the Beast this Christmas. This year’s show is set to be bigger and better than ever before. With incredible costumes, sumptuous scenery and mind-blowing special effect, this is almost certainly the best value pantomime in the North East.

I’ve created a brand new production for Stanley Civic Hall. It’s a hilarious script, filled with adventure, romance and hilarious comedy antics. Be sure to book tickets before the final petal falls for this beauty of a panto!”

Beauty and the Beast will run from 15th – 24th December 2021 at the Stanley Civic Hall. Tickets are priced from only £12.00 with fantastic family discounts available.

Beauty and the Beast